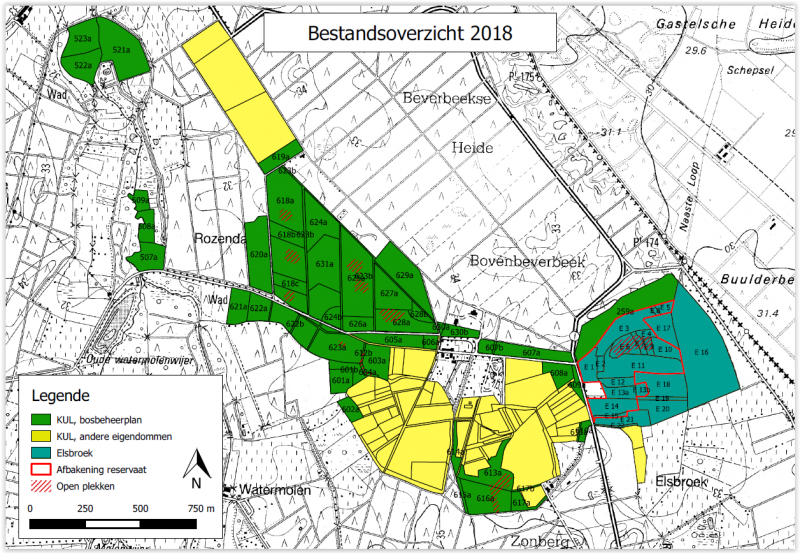 Map of the Beverbeek site

During the Pleistocene, these sandy formations were covered by younger deposits, including the clays of the Campine in the north, the sands of Mol and the Maasterrace. The niveo-aeolian loess and / or covering sand was deposited on this. During the Pleistocene, Late Glacial and Holocene, local sand was blown up from the exposed Wadden sands and along the rivers, to continental dunes. Hamont-Achel is situated just north of this thick sandy Campine plateau.

Vegetation
The wide variety in drainclasses of the soils expresses in the wide variety of vegetation types. In the most wet conditions are located the Alder groves, peaty birch forest and the gale shrub. In the forested part there is also Oak-Birch forests and the biggest part (on the dryer parts) is mixed coniferous (pine) and deciduous (oak an birch) forests. In the historical agricultural land there are important wood edges, permanent grasslands and crop fields.
Soils
The substrate is sand (Z in the Belgian soil map) in the whole site. Nevertheless this, there is a big variety in drain classes, from very wet soils in the valley of the Warmbeek and in the center of the Elsbroek, to dry soil in the more elevated area between Warmbeek and Elsbroek. Most of the soils have a clear humus and/or a iron B horizont. A specific type of soils are the Anthrosols, nearby old settlements. These soils originate of the former historical land management (potstal system) where the closest innerfields were elevated by the addition of the plaggen. These soils have a deep antropogene humus A horizont.
Hydrology
The experimental site is situated between the Warmbeek in the West and the Beverbeek in the East. In both the water flow is from the more elevated Campine plateau in the south to the Netherlands in the North. The historical agricultural land is situated around the Beverbeekloop in the south. The whole Area is in the river basin of the Maas and in the sub-basin of the Warmbeek.
The nature conservation Area Elsbroek is situated in a depression originating from a historical fishing pond. The Valley of the Warmbeek and the Elsbroek are the natural floodable area’s. In the Elsbroek the groundwater level is monitored since 20 years on 12 locations.